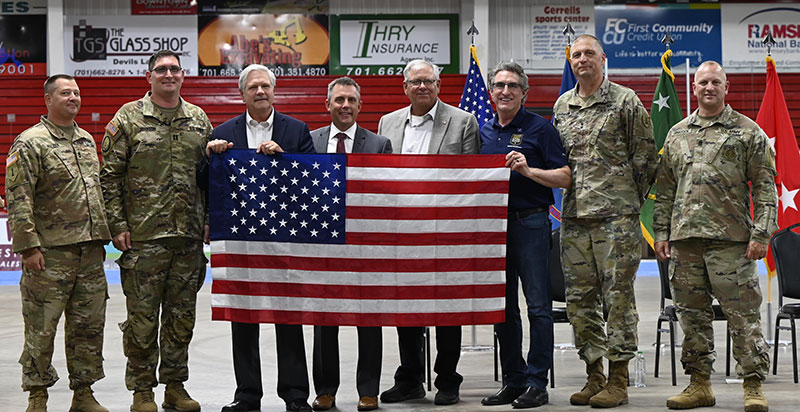 DEVILS LAKE, N.D. — Community members and elected officials joined members of the North Dakota National Guard in honoring 53 Soldiers and their Families at a welcome home ceremony today at Burdick Arena in Devils Lake. The ceremony recognized the accomplishments of the Devils Lake-based 835th Engineer Utilities Detachment and demonstrated appreciation of the Families and employers for their support during their recent overseas mission.

“With their successful deployment in support of operations overseas, the 835th Engineer Utilities Detachment has proven once again that North Dakota National Guard soldiers are among the best in the nation,” Burgum said. “In just nine months, these well-trained and highly skilled soldiers fulfilled an incredible 130-plus construction missions and requests for engineer support on 16 bases spread across six countries, providing crucial housing, utilities and other support. We are deeply grateful for their service and for the families, employers and communities who supported these soldiers during this critically important mission.”

The Soldiers were deployed from August 2021 to June 2022 and served overseas in the U.S. Central Command (CENTCOM) area of operations.

“We are all proud of your service and the quality of construction work performed during your mission. It speaks volumes about your reputation when higher headquarters requests the 835th Engineers by name – thank you for representing the North Dakota National Guard so well,” said Maj. Gen. Al Dohrmann, North Dakota adjutant general. “As always, we are indebted to our Families and employers. With their support, we can continue to successfully accomplish all of our missions, here at home and abroad.”

The North Dakota Guard Soldiers performed general construction in support of U.S. and partner forces serving in the CENTCOM area.

The North Dakota National Guard is a trained and highly motivated force of about 4,000 Citizen-Soldiers and Citizen-Airmen. We are always prepared to provide ready units, individuals and equipment in support of our communities, state and nation.  Always ready, always there.