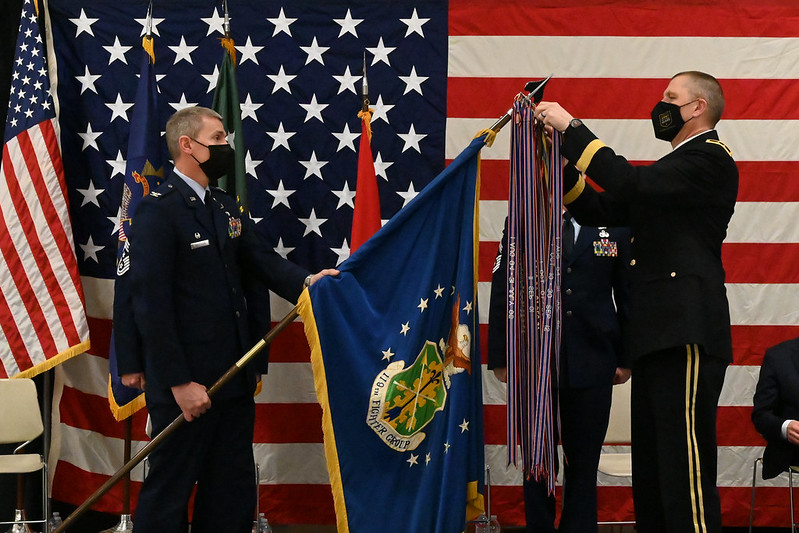 FARGO, N.D. — The North Dakota Air National Guard’s 119th Wing, known as the Happy Hooligans, formally accepted the Air Force Outstanding Unit Award (AFOUA) for the 22ndtime during a ceremony at their Fargo base on March 6.

“The Happy Hooligans represent the very definition of sustained excellence, and that’s not an easy accomplishment,” said Dohrmann. “Year in and year out, even with changes in leadership, you continue to operate at the very highest levels. You Hooligans through your culture, your devotion to duty, professionalism, and adherence to your values as an organization, have achieved this significant U.S. Air Force recognition 22 times. Truly marvelous.”

The award was accepted on behalf of the 119th Wing by its commander, Col. Darrin Anderson.

“Congratulations to all our Airmen. Your dedication to excellence is a key driver of mission success and the distinctive AFOUA is a great reflection of the caliber of talent our Airmen bring to the fight every day,” said Anderson. “I could not be prouder of the 119th Wing during my time as commander. Receiving 22nd AFOUAs is a phenomenal achievement and adds to the rich legacy of the Happy Hooligans.”

The AFOUA is awarded by the secretary of the U.S. Air Force to numbered units of the active-duty Air Force, U.S. Air Force Reserve and Air National Guard that have distinguished themselves by exceptionally meritorious service or outstanding achievement, including successful involvement with combat operations or exposure to hostile actions by an opposing foreign force.

The recent award period was for achievements rendered from Oct. 1, 2018 to Sept. 30, 2019, in which the 119th Wing successfully executed combat and expeditionary support operations to multiple commands by activating over 165 Airmen to locations around the globe. Notable accomplishments include over 10,000 combat hours flown resulting in successful degradation of enemy networks; the 119th Intelligence, Surveillance and Reconnaissance Group continuing to lead the Air National Guard through its 456 percent increase in target production output; and the 219th Security Forces Squadron facilitating a 98.7 percent sortie alert rate while safeguarding $3.3 billion in U.S. Strategic Command nuclear assets.