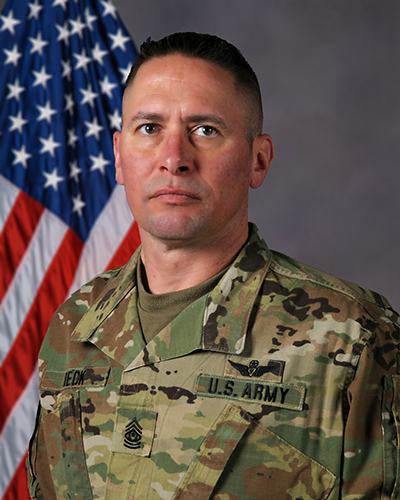 As state command sergeant major, Heck will be the principle senior advisor to the Adjutant General and Army commander on enlisted affairs of the North Dakota Army National Guard. He will enforce policies and standards of performance, training, appearance and conduct of enlisted Soldiers. He also will advise senior leadership on a variety of topics, including recruiting, retention, training, resiliency, family support, community events, education and employment for the state’s Army Guardsmen.

Heck, of Hillsboro, N.D., enlisted in the North Dakota Army National Guard in 1991 and was assigned as a helicopter mechanic in Detachment 3, Headquarters and Headquarters Company, 2nd Battalion, 137th Aviation Regiment. In 1997, he began working as a fulltime Guardsmen as an OH-58 Kiowa helicopter crew chief.

From 1997-2013, Heck served in numerous aviation positions within the North Dakota Army National Guard. He served as the aviation non-commissioned officer in charge in 2002 when his unit deployed in support of Operational Noble Eagle. In 2009-2010, he deployed as a platoon sergeant with Company C, 2nd Battalion, 285th Assault Regiment, was called to duty for Operation Iraqi Freedom and Operation New Dawn.


The North Dakota National Guard is a trained and highly motivated force of about 4,000 Citizen-Soldiers and Citizen-Airmen.  We are always prepared to provide ready units, individuals and equipment in support of our communities, state and nation.  Always ready, always there.