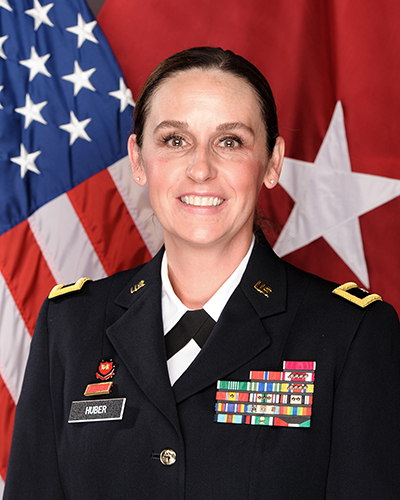 “Brig Gen Huber is a proven leader; she is the right person at the right time to serve in this important position,” said Maj. Gen. Al Dohrmann, North Dakota adjutant general. “She has deployed twice, served at every level of command and been a key member of our headquarters’ staff. Her dedication to our organization and passion for serving our Soldiers, Airmen, civilian employees, families and survivors, make her a great addition to our leadership team.”

A native of Bismarck, Huber, has served in the North Dakota Army National Guard since enlisting in 1989. Just a year later, in 1990, she deployed in support of Operations Desert Shield and Desert Storm with the Mandan-based 191st Military Police Company. Huber earned her commission as a second lieutenant through the University of North Dakota’s Reserve Officer Training Corps (ROTC) program in 1992. In 2003, she mobilized again for overseas in support of Operation Iraqi Freedom, serving as the personnel officer for the 142nd Engineer Battalion.

During Huber’s traditional Army National Guard career, she has held many key positions including command of the 129th Mobile Public Affairs Detachment, the 164th Engineer Battalion and the 164th Regional Training Institute. Most recently, she served as the operations officer for the Joint Force Headquarters’ Domestic Operations Section.

Besides her commands and other traditional military positions, Huber has worked as a full-time employee for the North Dakota National Guard since 1998. She held positions as a plans and operations specialist, director of the State Family Program and manager of the North Dakota


—— The North Dakota National Guard is a trained and highly motivated force of about 4,000 CitizenSoldiers and Citizen-Airmen.  We are always prepared to provide ready units, individuals and equipment in support of our communities, state and nation.  Always ready, always there. ###