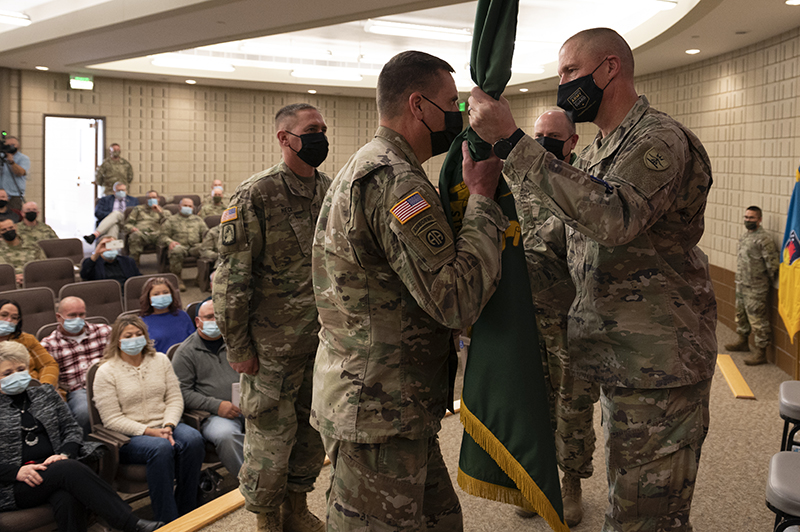 The outgoing commander, Brig. Gen. Leo Ryan, has led over 3,000 N.D. Guard Soldiers of since Sept. 2018. Col. Jon Erickson assumed command of the Land Component Command during the ceremony.

“The citizens of North Dakota are well served by the unwavering dedication of our National Guard Soldiers, thanks in part to outstanding leaders like Brig. Gen. Leo Ryan,” said Gov. Doug Burgum, commander in chief of the N.D. National Guard. “Our well-trained Guard Soldiers continually answer the call of duty here at home and across the nation and world. We are deeply grateful to Brig. Gen. Ryan for his service to North Dakota and the nation.”

The change of command ceremony is a military tradition which allows Soldiers to view the formal transfer of responsibility from one individual to another. As the orders formally designating the new commander are read aloud, the unit’s colors (flag) are passed from the outgoing commander to the incoming commander.

“I am extremely appreciative of the level of service and dedication to duty exhibited by Brig. Gen. Ryan during his 36 years to the N.D. National Guard,” said Dohrmann. “His commitment to taking care of Soldiers and ensuring they were properly trained and ready to respond when called ensured our mission success. We wish him well in his well-deserved retirement.”

A native of Jamestown, N.D., Ryan enlisted in 1985 as a bridge crewman in the 957th Engineer Company. In 1992, he completed Officer Candidate School and was commissioned as a second lieutenant. He has served in many key positions within the N.D. Army National Guard.  He commanded the 1st Battalion, 188th Air Defense Artillery Regiment; the N.D. Army National Guard’s Officer Candidate School and the 164th Regiment Regional Training Institute.

A traditional Guardsman, Ryan is an owner and practicing attorney of Dalsted and Ryan, P.C. with offices in Jamestown and Carrington, North Dakota. He is a graduate of the U.S. Army’s Air Defense Artillery Officer Basic and Advance Courses, Airborne School, Air Assault School, and Command and General Staff College. Ryan received his undergraduate degree from the University of North Dakota in 1992 and his law degree from the University of North Dakota School of Law in 1997. He earned a master’s degree in Strategic Studies from the U.S. Army War College in 2014.

“Thank you to all who placed their trust in me, I truly appreciate the support I have received,” Ryan said while addressing the audience at the ceremony. “It’s has been an honor to serve alongside the Soldiers of the North Dakota National Guard and my command team, Chief Warrant Officer 4 Rob Dorneman and Command Sgt. Maj. Derek Heck. Every time we’ve had to answer challenges, we’ve done it together.”

After Ryan thanked the audience, Erickson addressed the Soldiers in attendance.

“I appreciate the faith and confidence placed in me by the adjutant general who selected me for this command,” said Erickson. “I will work hard every day ensuring my best efforts and commitment to all of the National Guard Soldiers of this command. It’s quality Soldiers like you that make our organization one of the best National Guard units in the nation and I am proud to serve with you.”

Erickson brings nearly three decades of experience to his new assignment. In 1994, he was commissioned as a Military Intelligence officer through the ROTC program at the University of North Dakota.  His assignments include command of Headquarters and Headquarters Battery, 1st Battalion, 1st Air Defense Artillery Regiment, Fort Bliss, Texas where he deployed his unit to Saudi Arabia in support of Operation Southern Watch in 2000; Command of the 1st Battalion, 188th Air Defense Artillery Regiment, which deployed to the National Capital Region in support of Operation Noble Eagle in 2013; and command of the 141st Maneuver Enhancement Brigade, Fargo, where he served as commander for a multi-national force during Operation Saber Guardian in Romania in 2019.

He is a graduate of the Military Intelligence Officer Basic and Advanced Courses, Signals Intelligence Electronic Warfare Officer School, the Combined Arms and Services Staff School, the Air Defense Artillery Officer Transition Course, and Command and General Staff College. He earned a master’s degree in Strategic Studies from the U.S. Army War College in 2014.

In addition to commanding the N.D. National Guard’s Land Component Command, Erickson will continue duties as the full time Director of Joint Staff for the North Dakota National Guard.

In honor of his service and achievements over the past three years, Dohrmann awarded Ryan the North Dakota Distinguished Service Medal.