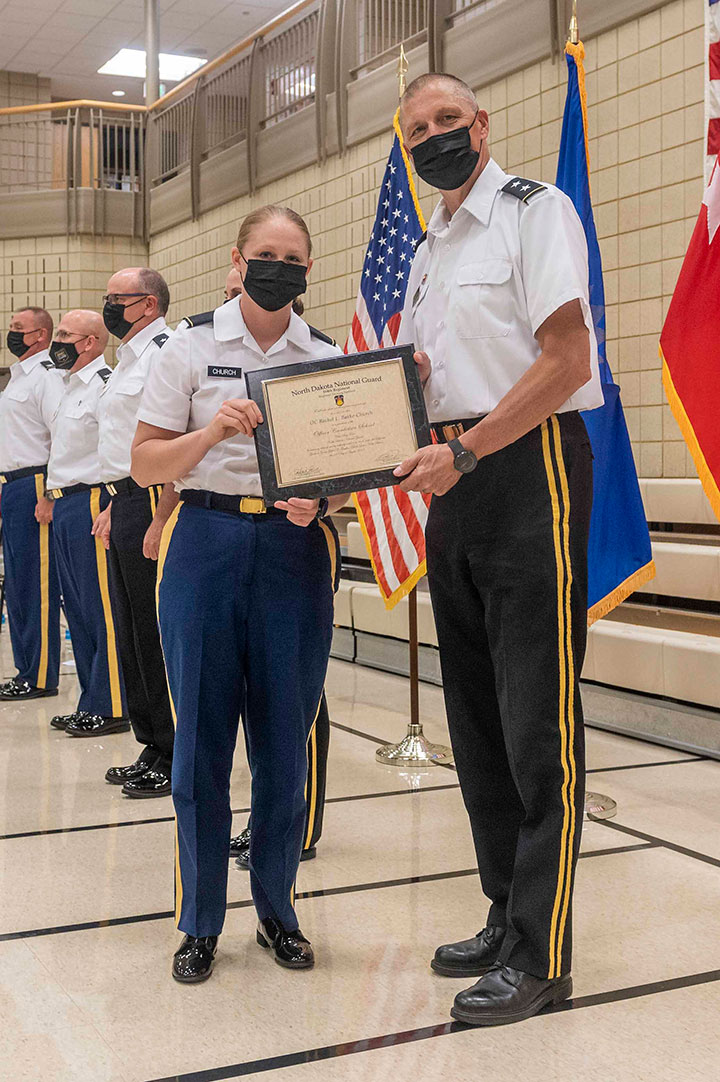 The keynote speaker for the event, Brig. Gen. Jackie Huber, N.D. National Guard deputy adjutant general, rendered remarks and offered advice to the graduates. Huber has served in the North Dakota Army National Guard since enlisting in 1989. Just a year later, in 1990, she deployed in support of Operations Desert Shield and Desert Storm with the Mandan-based 191st Military Police Company. Huber earned her commission as a second lieutenant through the University of North Dakota’s Reserve Officer Training Corps (ROTC) program in 1992. In 2003, she mobilized again for overseas in support of Operation Iraqi Freedom, serving as the personnel officer for the 142nd Engineer Battalion.

Maj. Gen. Al Dohrmann, North Dakota adjutant general, presented the graduates with their diplomas, while Brig. Gen. Leo Ryan, North Dakota National Guard Army Component commander, administered the oath of office to the newest second lieutenants in the state. Lt. Col. Barbara Lowe, commander of the RTI’s 2nd Training Battalion, presided over the “Pinning Ceremony,” where the new officers donned their gold-colored second lieutenant bars. The graduates were joined by family and friends during the ceremony.

Students can pursue their commissions by attending a three-phased, 8-week accelerated course at Fort Meade, South Dakota, or at Fort McClellan, Alabama. OCS students also have the option to participate in a traditional course, which is spread out over 16-19 months during National Guard training weekends with two additional 2-week training periods. Other sources of officer commissioning are available through North Dakota’s ROTC program with locations at the University of North Dakota, North Dakota State University, Minnesota State University Moorhead, and Concordia College — Moorhead.

North Dakota has been training officers since 1957. The program’s mission is to create leaders who are mentored, trained, and empowered and essential to the Guard’s three-pronged mission of supporting communities, the state, and the nation. To date, the North Dakota OCS program has graduated more than 1,400 Soldiers.

** indicates prior acceptance of commission