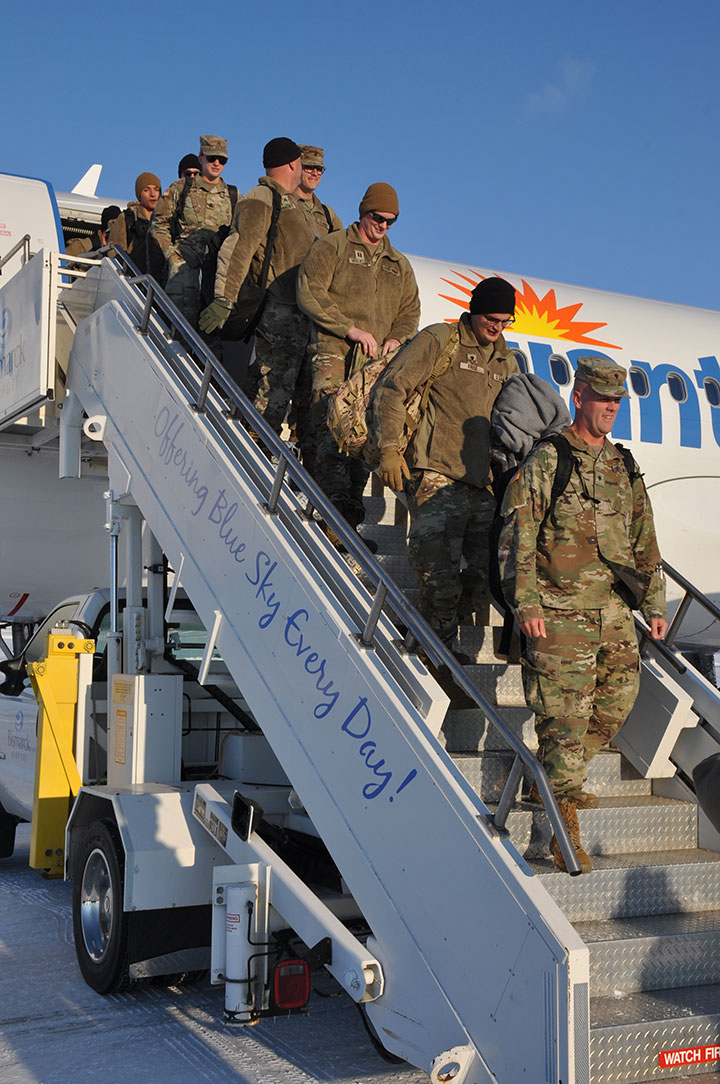 BISMARCK, N.D. — The North Dakota National Guard’s Bismarck-based 957th Engineer Company (Multi-role Bridge) is redeploying from its year-long role in support of the Customs and Border Protection’s (CBP) mission along the southwest border. Today about 70 of the 120 Soldiers on the mission were welcomed home via charter flight at the Bismarck Airport.

Under the direction of U.S. Northern Command and Joint Task Force North, the 957th Engineer Company’s mission was to assist the CBP by providing detection and surveillance support.

“The highly trained members of the 957th Engineer Company served with courage, skill and professionalism as they supported efforts to secure the southwest border, and we are deeply grateful for their service and their safe return,” said Gov. Doug Burgum, commander-in-chief of the North Dakota National Guard. “The North Dakota National Guard continues to play a critical role in border security, working to address illegal immigration, stop drug and human trafficking and ensure the safe and efficient flow of goods and services for the benefit of all Americans.”

This is the largest single movement of Soldiers from this unit. About 30 Soldiers returned home last week and about 15 are scheduled to return to North Dakota this weekend via commercial flights.

“We salute the Soldiers who answered the call to serve during this important year-long mission in support of the CBP,” said Maj. Gen. Al Dohrmann, adjutant general for the North Dakota National Guard. “We also are indebted to our Families and employers for their support and sacrifices on behalf of their loved ones and employees.”

The Soldiers bussed to the nearby Army Aviation Support Facility where Families, friends and fellow Guard members were waiting to greet them.

Two Soldiers were recognized during this mission for their role in rescuing drowning migrants on March 22, 2022.

A formal welcome home ceremony is planned for January 2023 in Bismarck.